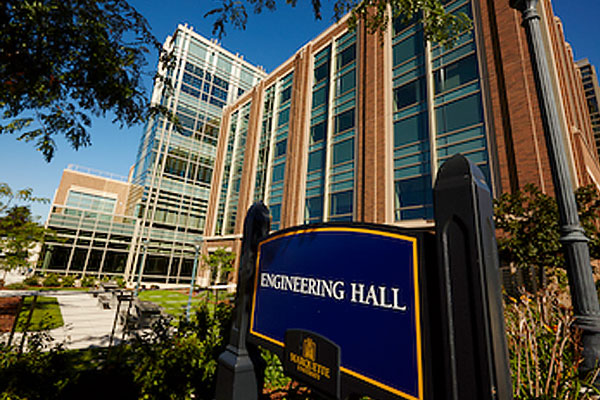 Azura’s David Ellis presented a case study based on troubleshooting the failure of a food waste anaerobic digester as part of Dr. Daniel Zitomer’s anaerobic treatment short course: “Anaerobic Treatment of High-Strength Industrial and Agricultural Wastes.” This course has been offered annually by Marquette University for more than 18 years.

The course serves those who deal with high-strength industrial wastes or who are involved in operating and designing anaerobic treatment processes. The short course is designed to walk people through the anaerobic treatment processes, from fundamental principles to case histories. The case history presentations demonstrate anaerobic technologies in real-world industrial settings and allow for questions regarding specific problems encountered and solutions developed.

Professor Daniel Zitomer is the chair of Civil, Construction and Environmental Engineering at Marquette University in Milwaukee, Wisconsin. Dr. Zitomer completed his graduate degrees at Vanderbilt University where he worked with industrial and anaerobic wastewater pioneers Drs. Richard Speece and Wesley Eckenfelder. Dr. Zitomer’s research group hosts an anaerobic digestion short course every year for the purpose of helping wastewater professionals. Dr. Zitomer also invites experts from the wastewater industry to present in his short course.

For the 2020 edition of the course, Azura’s David Ellis was invited as a presenter. David’s presentation included a case study of a market-digester that received food waste feedstock and experienced a complete failure. Following an investigation and intervention, the digester achieved 80% biogas production within 2 months, and full production a few weeks afterwards.

The focus points of the case study were on digester monitoring and testing that could help operators spot potential issues and act before getting into trouble.

In the presentation, David introduced the idea of having different tiers of tests for digester operating parameters. Tier 1 tests are those simple tests that can be done daily, at the digester site, by the plant operators. These tests include temperature, pH, biogas composition, and a titration to estimate the concentrations of organic acids and the buffering capacity of the digestate. The concentrations of organic acids (also called volatile fatty acids, VFAs) and alkalinity (a measure of buffering capacity) can be measured by a titration method using several slightly different procedures which result in calculated ratio values such as the Ripley Ratio, the VA/BA, VFA/TA, and FOS/TAC.

FOS/TAC or FOSTAC is from the German Fluchtigen Organischen Sauren (FOS), a measure of the volatile fatty acids and the Totales Anorganisches Carbonat (TAC), the total inorganic carbon.

Tier 1 tests can give good indication of how the digester is performing and stable tier 1 test results usually indicate stable digester operation. However, these tests cannot identify more complicated issues that might cause digester challenges in the future.

Tier 2 tests are more sophisticated tests and are usually done at an off-site facility such as a specialized environmental laboratory. Some of the tier 2 tests include speciated volatile fatty acid (VFA), long-chain fatty acid (LCFA), different forms of nitrogen and phosphorus, and concentrations of trace metals in the digester. Nitrogen, phosphorus and trace metals are well known in the scientific literature to be important for digester operation, because the right amounts are needed for good digestion. Too much or too little, however, can cause digestion problems, inhibition, or toxicity-related failure. VFAs are known to be important to anaerobic digestion, since acetic acid is one basic food unit for the anaerobic biomass. However, the VFAs are also known to be inhibitory in high concentrations.

LCFA concentration is a parameter that is gaining attention in the academic world due to the increased interest in anaerobically digesting high-fat feedstocks for biogas production. Several studies have sought to understand the inhibitory nature of LCFAs. However, most of the studies were done in controlled, laboratory settings. Little practical data from operating digesters are available in the public. Over several years Azura has built a proprietary database of LCFA data from a range of full-scale operating anaerobic digester systems.

The digester involved in this case study contacted Azura because the plant’s biogas production was not able to achieve the facility nameplate capacity. Days after the first round of samples were collected, the digester crashed completely with zero biogas production.

Azura’s David Ellis presented a case study of helping a farm-based digester as a part of Dr. Daniel Zitomer’s anaerobic digestion online short course. The case study focused on the importance of testing and knowing what additional data to look for in digestor remediation. The study also shares some empirical guideline values for LCFA concentrations in digester as determined by years of LCFA testing done by Azura. END_OF_DOCUMENT_TOKEN_TO_BE_REPLACED

A case study of a full-scale food waste digester failure and recovery was presented at the Value of Biogas West Conference in Vancouver. This case study demonstrates the need for balance in anaerobic digester feedstock as too much of the coveted FOG can be problematic. END_OF_DOCUMENT_TOKEN_TO_BE_REPLACED

Azura had 2 presentations accepted by WEAO and was schedule to be presented at the 2020 WEAO conference. Due to the COVID-19 pandemic, the in-person conference and presentations were cancelled, but the papers were able to be published online. One of the presentations explored the possibility of establishing an advanced digester monitoring tool that could predict if the digester was susceptible to imminent failures or crashes. END_OF_DOCUMENT_TOKEN_TO_BE_REPLACED

An food waste digester case study from Azura Associates was incorporated into the training material presented by anaerobic digester experts Dr. Melanie Hecht and Birgit Pfeifer at the IBBK’s virtual Biogas Operator Training in June of 2020. Dr. Hecht, who is a Senior Biogas Plant Biology and Process Control Expert, presented a section called “Practical Plant Operation: Process Control and Plant Optimization” at this event. This case study highlighted the methodology used by Azura to recognize imbalances and proactively adjust the digester feedstock recipe to balance its nutrition for optimal biogas production, performance, and consistency. END_OF_DOCUMENT_TOKEN_TO_BE_REPLACED

For URGENT matters outside office hours, please use our Contact form.